An Interview with Elliot Jay Stocks

Elliot Jay Stocks is a UK-based designer, musician, writer, & speaker. He makes electronic music under the name Other Form and runs the label Unknown Movements. We recently got a chance to sit down and grab a digital drink with him to chat about his creative process, latest releases, and designing album covers with Components AI.

Adam: Tell me a bit about your album cover design process.

Elliot: I started the label in 2017 just to release my own music, and then it sat dormant until 2020. I had these plans in 2019 that I would release a bunch of stuff in 2020. So, at the beginning of 2020, the compilation I used Components AI for was a fresh start. I used the same type, so there's an inherent system there through the typography. But, apart from that, visually, it was open to doing something completely different. I think partly because it was a compilation, I didn't want to do anything photographic, which I'd previously done a lot of: shallow depth of field textures of moss and trees and stuff like that. I was very much in this mode of experimenting, letting things happen semi-organically by themselves. 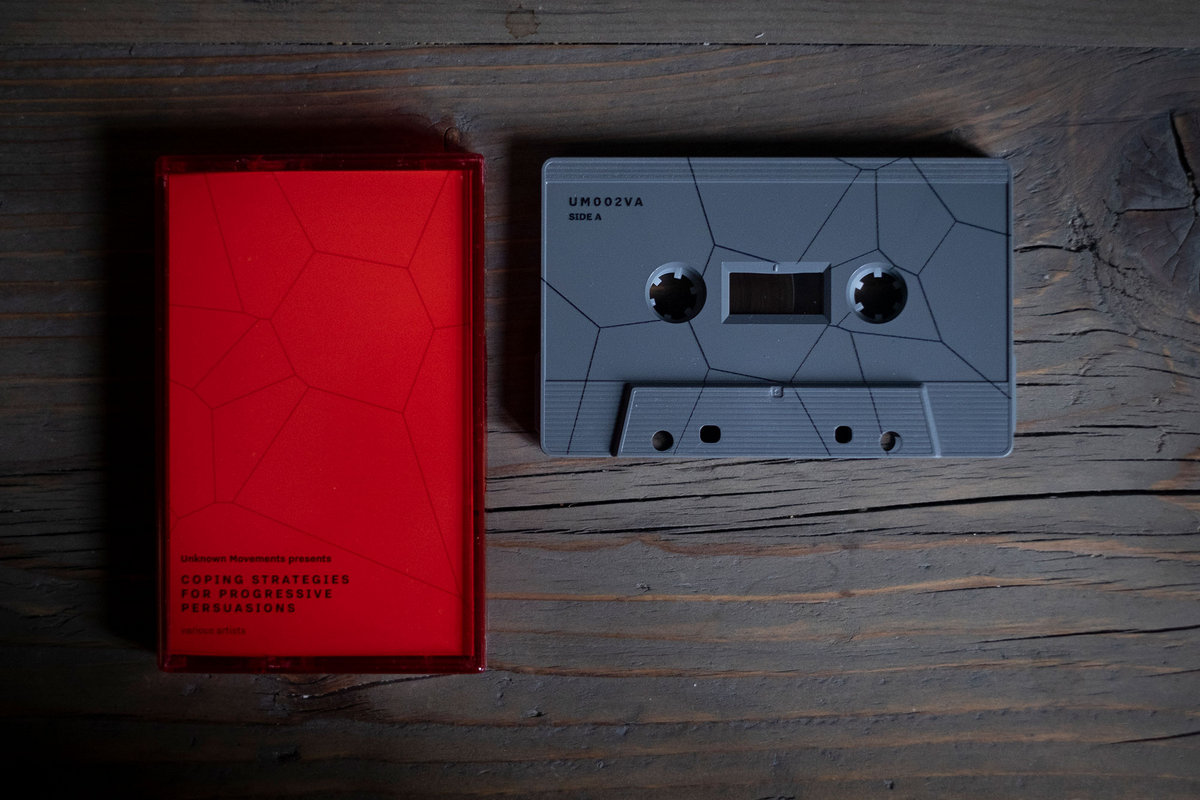 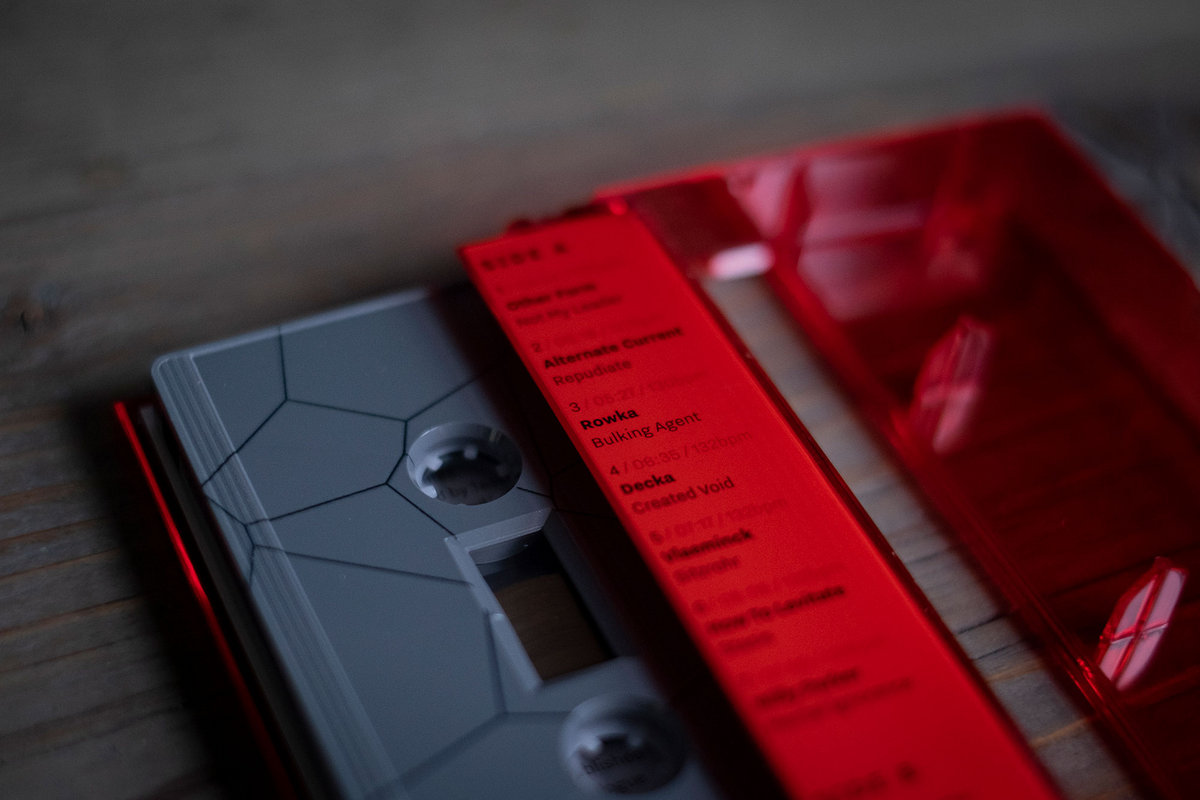 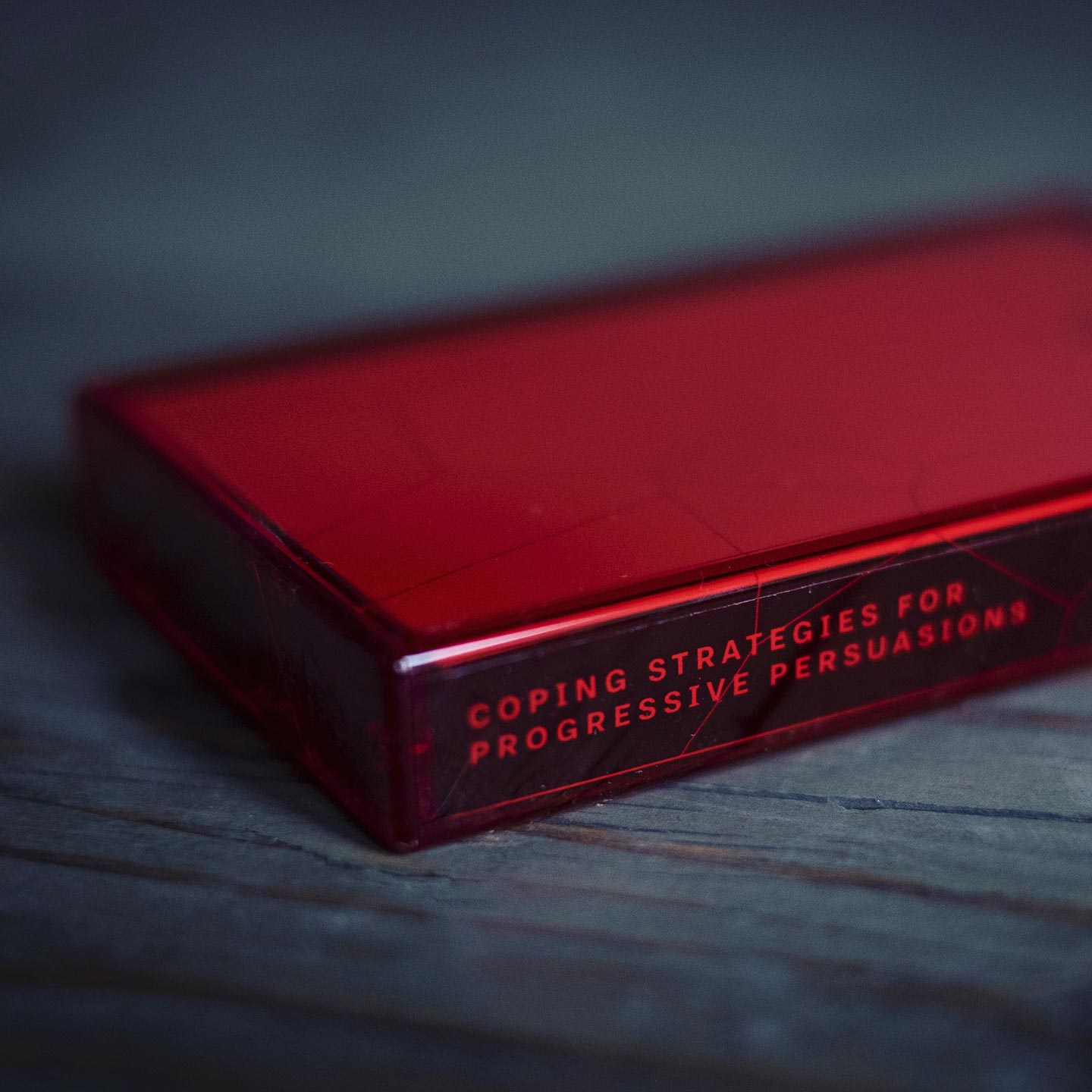 Sleeve and cassette design for Coping Strategies for Progressive Persuasions.

There were two things I loved. The first thing is that you could just generate things and hit a random button and get something new. This feeds very much into a recent-ish approach to music, just setting some parameters and letting things happen.

The second thing is that you could export that as an SVG. I had my musician's hat on for the creating process, but the designer's hat on for, "What am I going to get out of this? I get an SVG file that I can use in my design app of choice. That’s great.” The ability to get an SVG super easily doesn't require me, as a total non-developer person, to dig into any code. I just get something that I could throw into an app and design some stuff around. Because it was pattern-based and I chose a Voronoi graph that only had a few nodes so that the focus would really be on those few lines that you see on the artwork, I already had the idea that I would do a cassette. It was a very loose idea, but it was like, "This ticks all those boxes in terms of being able to generate something quickly and easily, and have a usable vector-based file at the end of it." That's the appeal for me in using Components AI, where I don't have to think too much about what this is. I just have a very vague set of parameters that I want to set, and then see what comes of it.

Adam: In Ableton, there's all these presets for compression or reverb. They'll be labeled in a context-specific way: maybe it's reverb for acoustic guitar, and there will be four options for acoustic guitar reverb. But, it doesn't lock you in. It's just: here's a preset of a configuration for an API. Even if you don't know anything about reverb, you can drag it around and then hear this result. I find no matter how fast I get at writing code, there's just nothing faster than dragging a slider and hearing or seeing the rendered output in real time.

Adam: Are there concepts, or ways of working, in something like Ableton Live that you wish existed in digital design tools?

Elliot: For me, Ableton's always stood out as a design-focused company, and Live is such a standout app. At our age, we've seen that shift from, "You can't do that because you need a supercomputer to do that," to, "You can kind of do that, but you can hear that it's digital" to, "There's no discernible difference. There's nothing that you can't replicate digitally." But, the one thing that I think it's still really hard for software to do is to emulate the accidental creativity that comes just with twiddling hardware knobs. Certainly in terms of web design and apps that do this screen-based design, there isn't that sense of experimentation, which is fine because making a piece of music that is generative and experimental is very different to trying to design an app that you need to be functional. You don't want it to be crazy and have all these random things firing off. 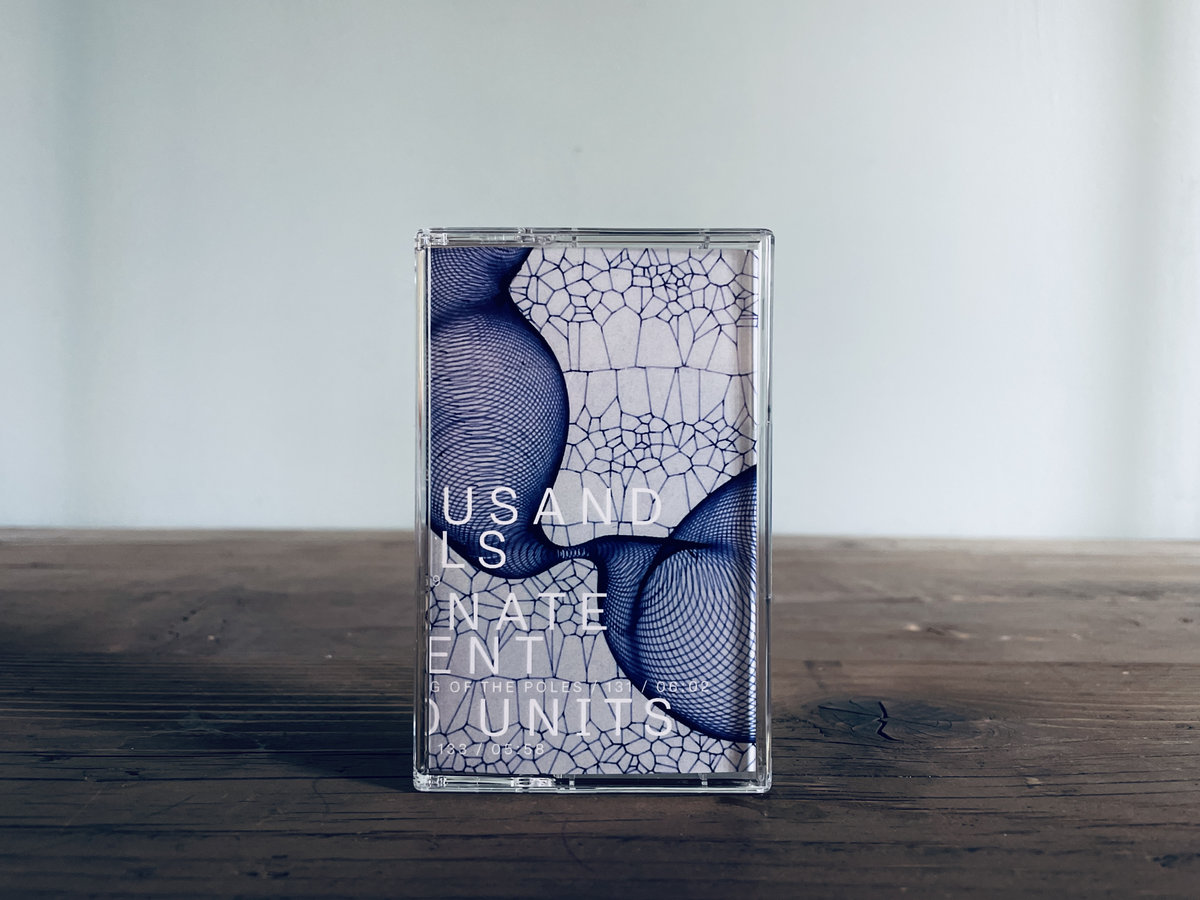 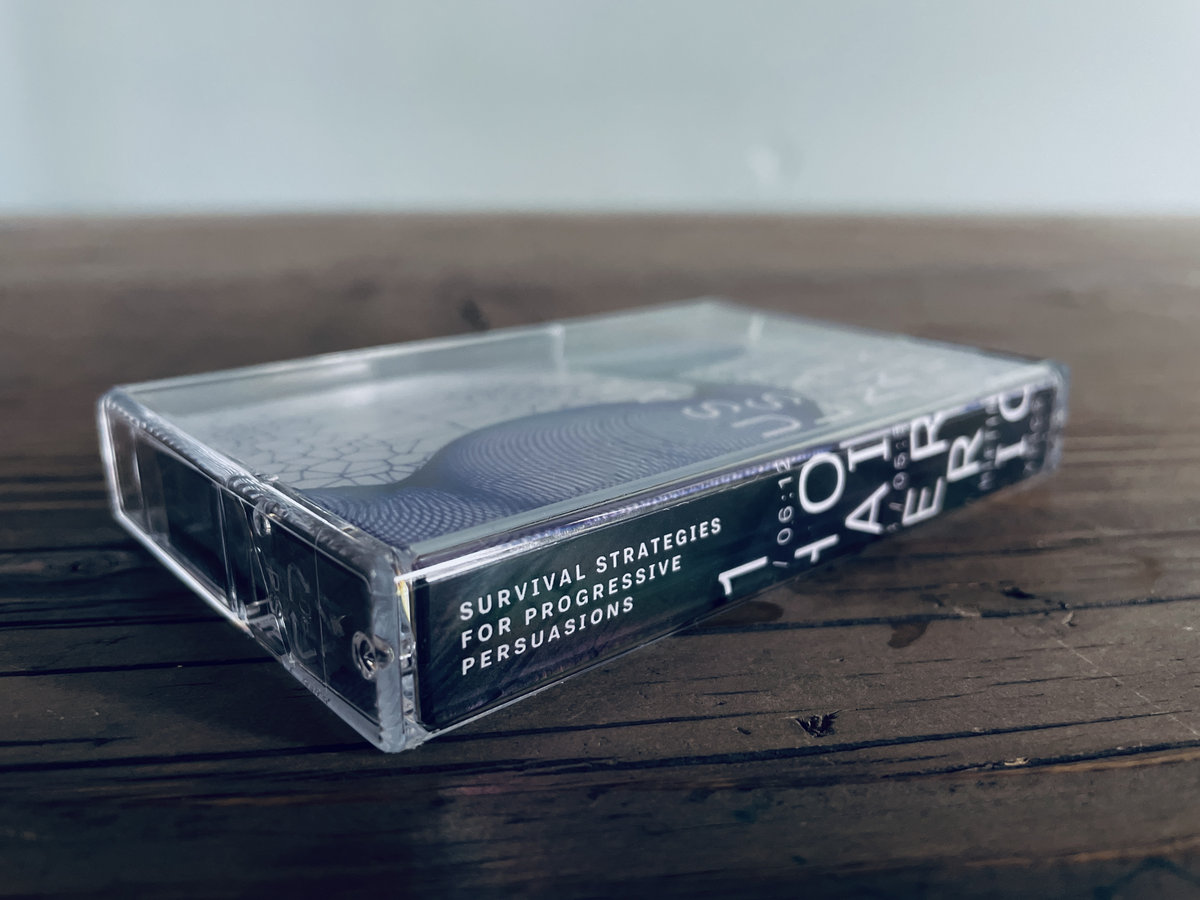 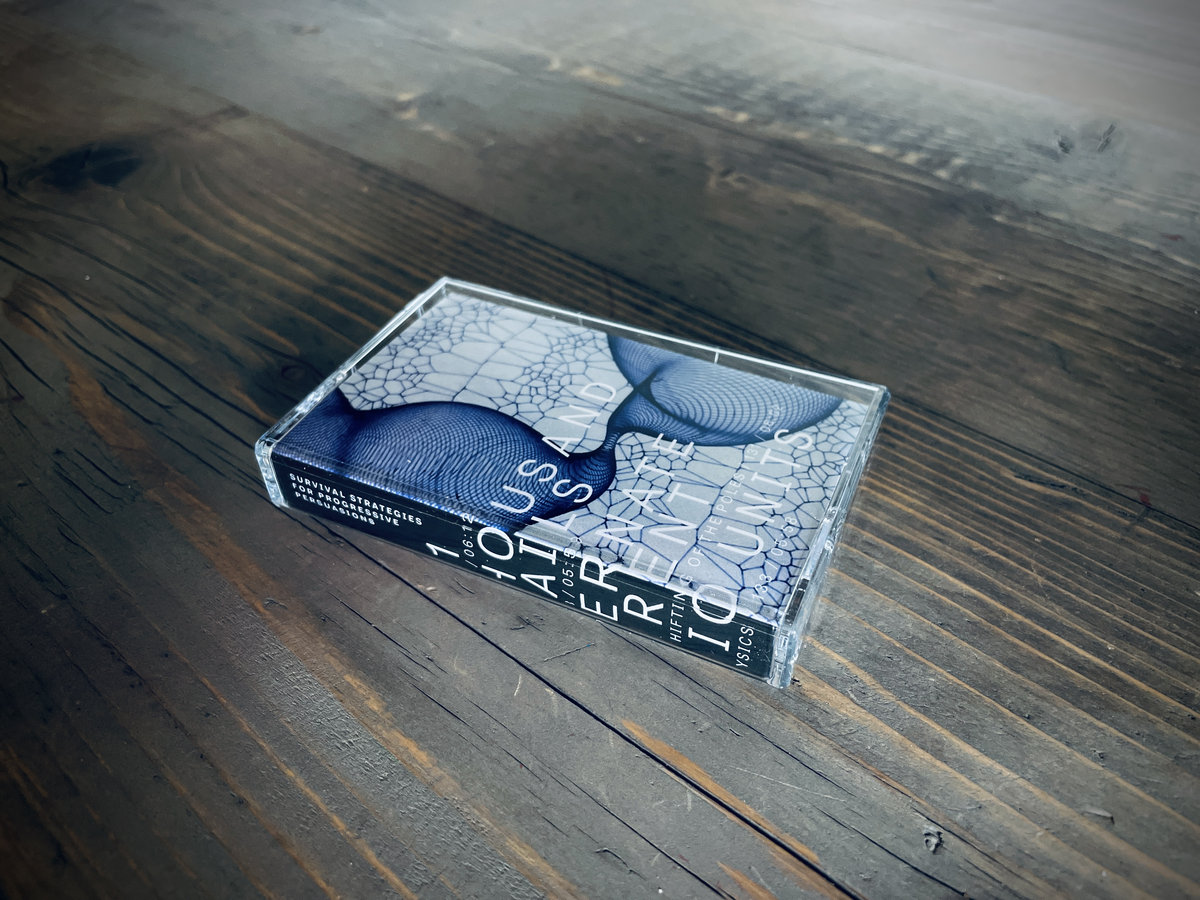 Cover design based on a pen plot combining simplex and voronoi components.

But in Ableton Live and with certain devices, you can have something that makes a little bit of user input result in something semi-unexpected. Michel Iseneld, the guy who runs Hypnus Records in Sweden, has done a couple of Max for Live devices. He has one out that is basically a filter, but the envelope is shaped based on sacred geometries. That’s a really interesting idea for a digital interface. It requires very little of you as the user. You just set up the device, choose a couple parameters, let it go. It results in something not necessarily wildly unexpected, but something that you perhaps wouldn't have encountered if you'd drawn an envelope. Yes, there are plugins that create stuff for you, but there isn't much experimentation. Plugins and the software itself is based around allowing you to do something very quickly, but not necessarily allowing you to create something that you, as a creative, would not have had in your head in some way before you started moving a cursor around. I think it's different in your world with generative art. There's more experimentation that goes in there.

Adam: Being a designer, do you think about where people will be when they consume the music you make? Does that impact your process? Do you have a goal of what their experience is?

Elliot: Certainly, there are visual aspects of music, like designing covers, where there is a consideration that this is going to be on a streaming service, and it's going to be a certain size. You don't want the type to be too small. You want things to be instantly recognizable. Craig Mod wrote a great piece a few years ago on hacking the book cover on the assumption that it would be viewed at these very small sizes and not as a physical book. I think there's loads of that that goes into creating design for digital music. But, for the music itself, I'd say it's disconnected in the sense that music is very much a personal and slightly selfish activity. I let things happen that I want to make, rather than trying to overthink about what is necessarily popular or club-ready. Obviously, I'm not making obscure black metal. It's not totally noncommercial music. But it's an escape from a lot of those considerations that come with the design day job, for sure.

Adam: Is the escape part rooted in the process of making, or is the outcome and manifestation a tangible product, whether it's physical or digital?

Elliot: I think it's the process. Having hardware, physical knobs to twiddle, physical faders, just results in unexpected things happening that’s different to when you're working with software. And, I do use a lot of software, but it starts as a jam on equipment with hardware sequencers as well, so some of those accidents and randomness can come into it. Once there's a bunch of recording, then I'll start manipulating it with software. Everything's automated towards the end and mixed to within an inch of its life, but it starts off as something a little bit more organic, as the cool kids say. 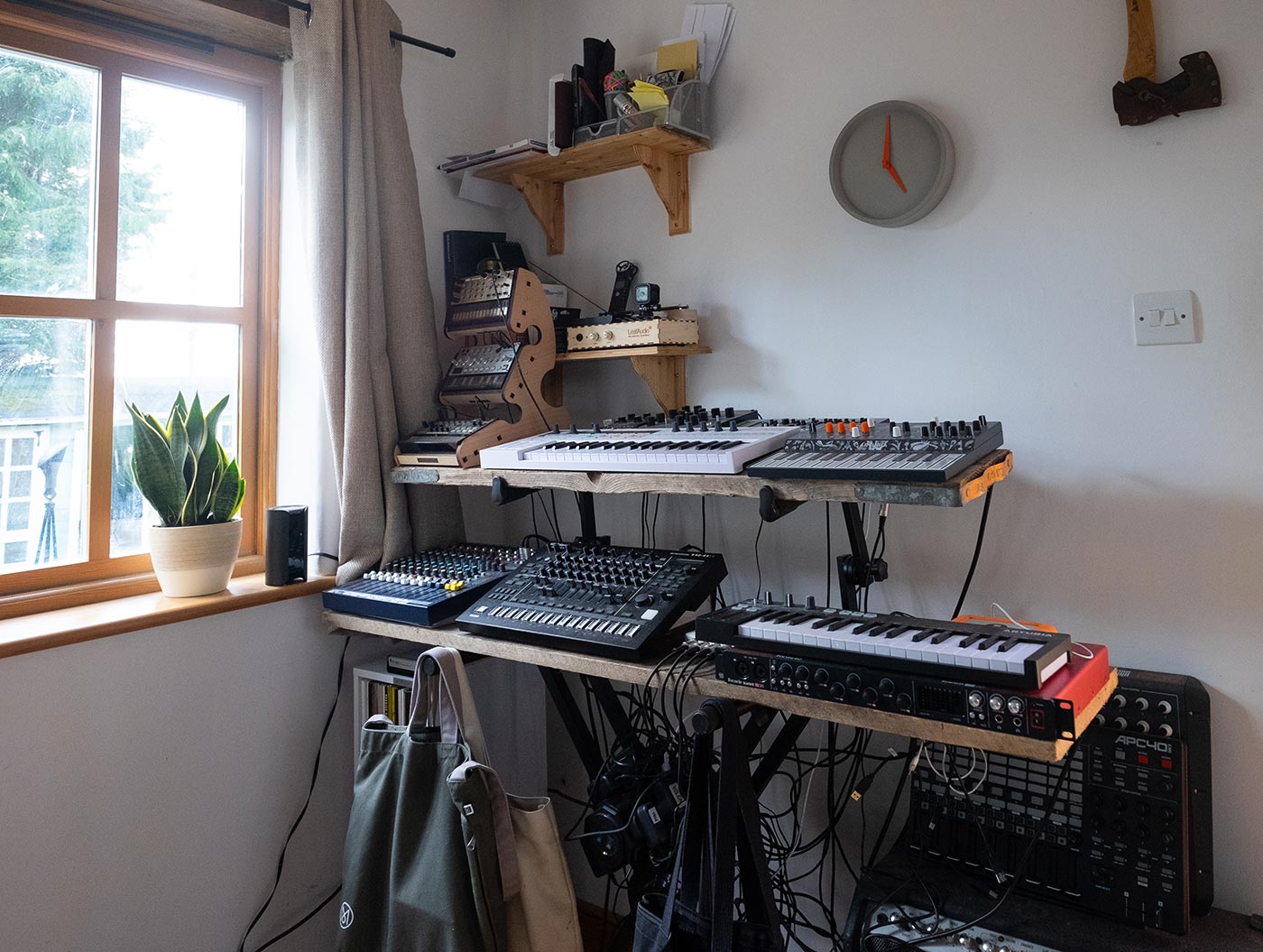 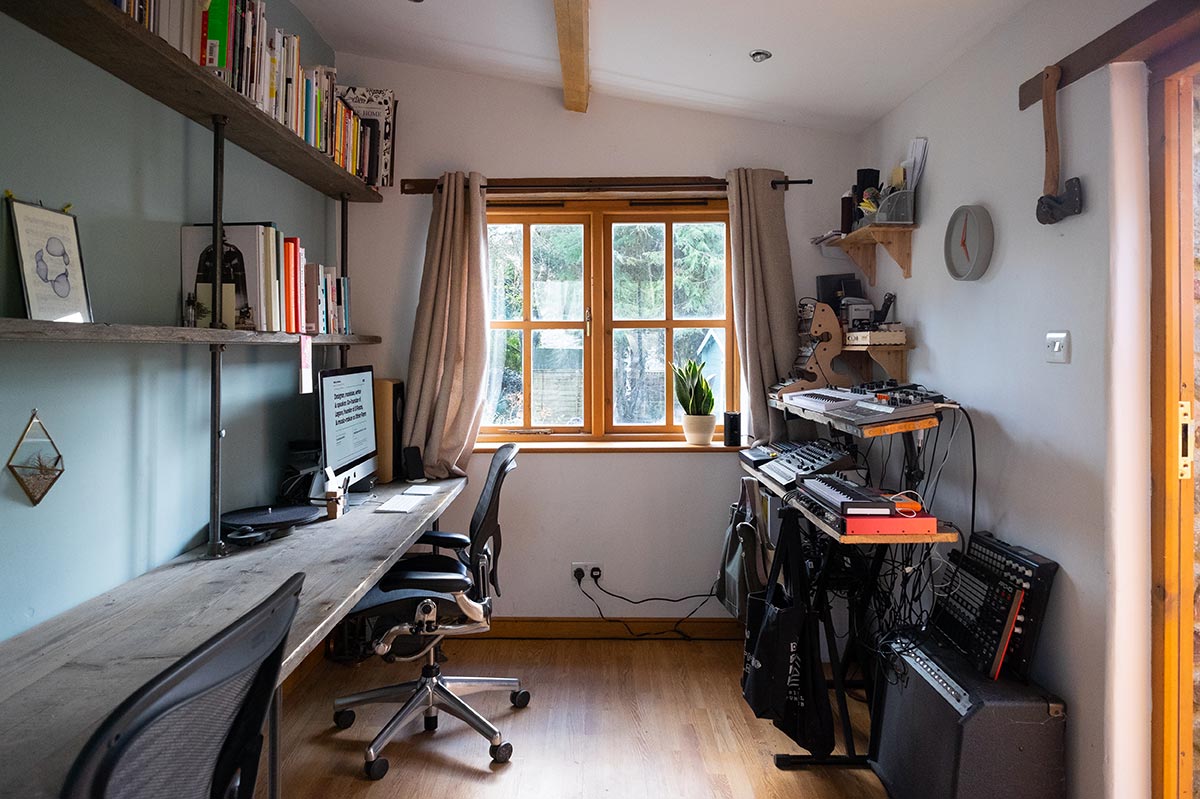 Elliot: As a necessity, and a recent-ish necessity. My teens were spent being very into guitar-based music. As soon as I got into that, I wanted to write my own stuff. I got a keyboard that I could program some basic basslines on, which allowed me to do home recordings without the need for a band. That inadvertently led to discovering electronic music. I was always into electronic music hardware, but I was more using it as a backing for the rock, metally stuff I was doing. My music experience up to that point was very: think of a song, write a song, practice the song, record the song. There is experimentation, obviously, when you're writing music, but it often doesn't make it to the final thing. Whereas electronic music, some of that stuff that happens on the fly makes it into that final thing, and you end up with something that's got unexpected elements in it. That's perhaps similar to your own stuff, where it's programmed but also generative, and unexpected things happen when you're physically putting that ink on the paper. All of that stuff, I love, that marrying of digital worlds with the unexpected of the analog.

Adam: Did you feel limited by the guitar as a soundscape?

Elliot: I don't know if it was necessarily a conscious awareness of, "this instrument is limiting me so I'm going to put it down and try something else." All of the stuff that I'm into techno-wise, electronic-music-wise, is very much about the sound design and the textures. That's a bit of a distinction from doing rock music, where it's about writing a song. You don't have to be a great audio engineer to write a great rock song. It's about the composition, whereas when you're doing electronic music, the role of audio engineer also falls on you as the composer. And so to produce to a decent-ish standard, you also have to have an understanding of studio engineering to a degree, even if it's software-based. That felt so different from the guitar-based stuff, this focus on exactly crafting a very particular sound. 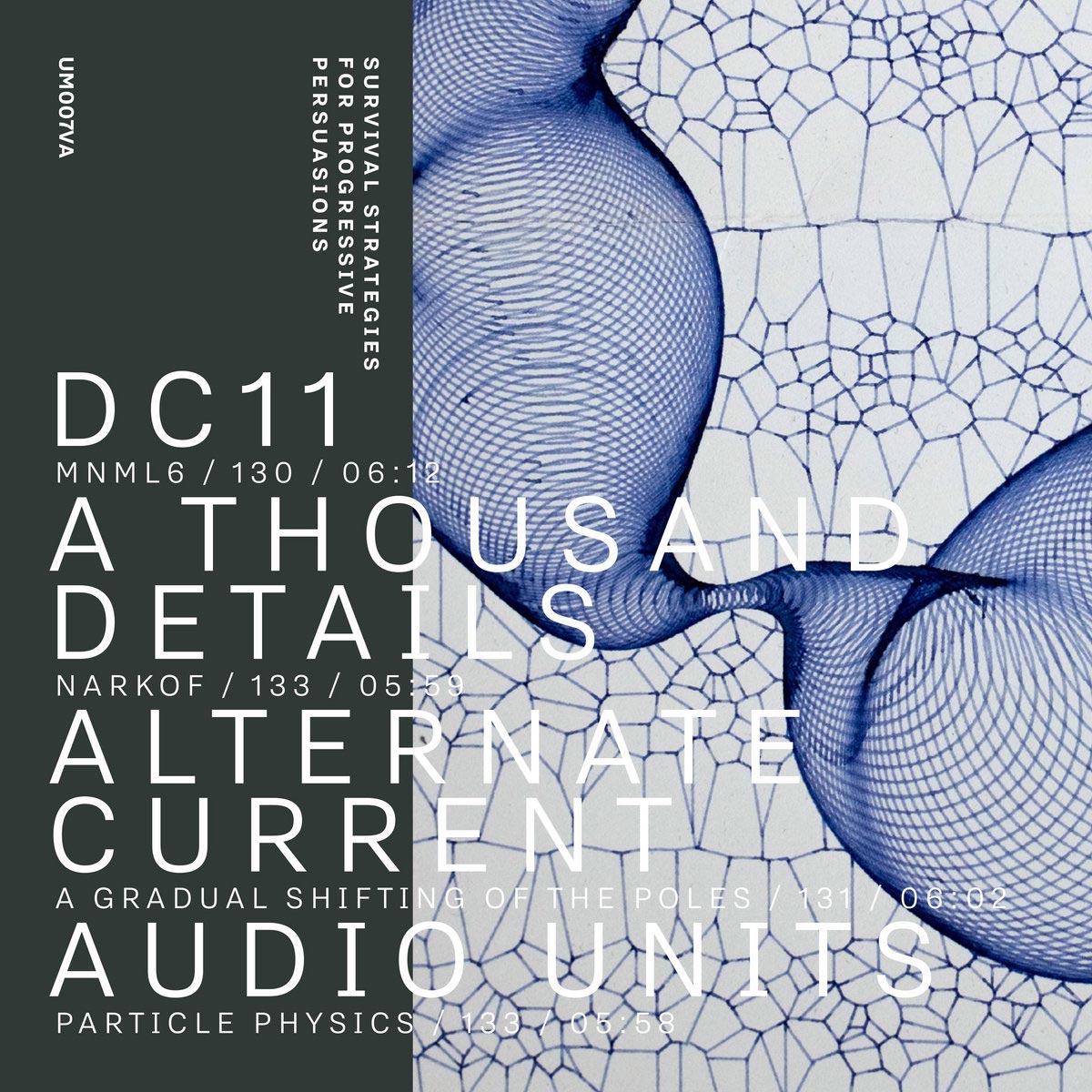 Survival Strategies for Progressive PersuasionsA four-track collection exploring a deeper and more hypnotic side to Other Form’s imprint, marking debuts on the label from dc11 (Cosmic Wave), Audio Units (Qilla), and A Thousand Details (Edit Select, Hayes, ATD), as well the appearance of long-time collaborator Alternate Current.Available on Bandcamp